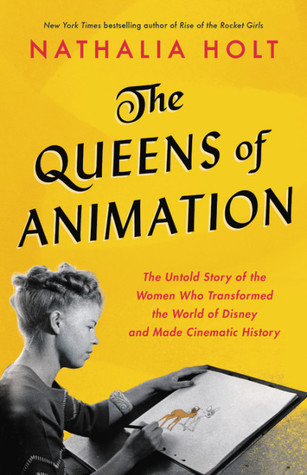 The Queens of Animation

In this history, the author highlights Disney's largely forgotten female writers and animators. Animation aficionados may know of the studio's largely female-staffed Ink and Paint department, but the contributions discussed here embraced many other areas. Grace Huntington was the second woman ever hired for Disney's story department, as well as an avid, record-setting pilot. Artist Sylvia Moberly-Holland supervised key Fantasia and Bambi sequences, while designer Mary Blair masterminded Cinderella's mid-century modern aesthetic, and was later asked personally by Walt Disney to oversee Disneyland's "It's a Small World After All" ride.

Despite demonstrating their immense talents, Holt's subjects faced continual workplace slights and hostilities, from sexual harassment to the denial of credit for their accomplishments. While restoring these women to their rightful place in history, the author also covers the evolution of Disney's animated features, such as how the studio continually integrated new technological innovations, including the multiplane camera, stop-motion animation, Technicolor, and many others. Going up to the present to highlight how women have continued to play key roles in making films like Brave and Frozen.

Nathalia Holt, Ph.D. is a science writer and the New York Times bestselling author of Cured: The People who Defeated HIV and Rise of the Rocket Girls: The Women Who Propelled Us from Missiles to the Moon to Mars. Her work has appeared in numerous publications including The New York Times, The Los Angeles Times, The Atlantic, Slate, Popular Science, and Time. She has trained at the Ragon Institute

The Queens of Animation Comentarios