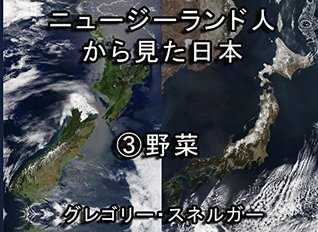 This is a series of books written in Japanese comparing Japan to the similarly-shaped island nation of New Zealand.

To understand the true nature of something you have to view it from the outside. What's common sense in Japan is considered utter nonsense by foreigners! Gregory Snelgar is a TV personality active in Japan. He came to Japan in 2008 and has lived in Fukuoka, Niigata and Tokyo. He has also explored 11 other prefectures. How does Japan look to a guy from a country where there are 100 times as many farm animals as there are people? An international comparison full of the funny, the interesting, and the downright wacky contrasts between New Zealand and Japan.

In this volume he discusses Japanese vegetables, including organic vegetables, and also introduces a few unique New Zealand ones. Check it out!